Stories from "The Joint" 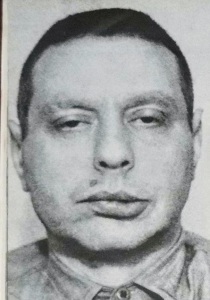 Harold Konigsberg was a Jewish Mafia hitman from Bayonne, New Jersey. When he arrived in Springfield, “Kayo”—a nickname earned through his boxing chops—was serving time for receiving stolen goods and awaiting trial on more serious charges. Part of his lawyers’ defense was that he was insane, so he was sent to the Fed Med for evaluation.

Kayo’s loathsome reputation was solidified long before he arrived in Springfield. He was known for his outrageous demands and zeal for strong-arming anyone who got in his way. He created a maelstrom in the federal prison system. There was no behavior too audacious or despicable that he would not use to his advantage; to stall proceedings and feign incompetence while appearing before the judge, he defecated as he sat in his wheelchair.

him. Unfortunately for Springfield, he was deemed unfit to stand trial. As it was a medical and psychiatric facility, there he stayed.

Kayo had the constitution of a Neanderthal. Outside of prison, it was not unusual for him to consume multiple steaks in one sitting. Inside the Joint, he stole food from other prisoners who quickly learned to adjust to hunger rather than defy him. When he threatened an inmate with rape, the young man committed suicide rather than endure the possible attack.

The shame and constraints of living in federal prison as a convicted felon did nothing to temper or discourage Kayo. He was a tunnel-boring machine—arrogant and indefatigable as he crushed his way through the rank and file of the prison system’s bureaucrats, personnel, and lesser inmates.

He used his time and resources to study the law and build cases for his defense in upcoming legal proceedings—and to file countless lawsuits against anyone who defied him. He sued the Bureau of Prisons, wardens, and correctional officers. He incessantly claimed that his civil rights were violated, and personal property confiscated illegally and never returned to him—items that no other inmate could possess.

His tenacious wearing down of his overseers succeeded. So exhaustive were his efforts to circumvent authority by intimidating his guards, many standard restrictions were altered or lifted from him. He received packages that were no longer screened—or if they were, contraband that would have been confiscated from anyone else was overlooked. Large amounts of cash were found during a shakedown of his cell. Phone calls, visitors, and access to books and other privileges increased exponentially for him compared to everyone else.

The toll that Konigsberg’s presence took on the prison community could not be overstated. Like Dad, a lot of the men who entered the Bureau had served in the military. Rank and file psychology was still freshly impressed upon them as was the reasonable expectation for your superiors and peers to have one another’s backs. As Konigsberg’s formidable reputation spread, so did his power and privilege. With growing occurrence, his abhorrent behavior was not only overlooked but rewarded. It worsened as it was enabled by higher-ups who were afraid of him. As Konigsberg thumbed his nose at the guards’ authority, morale amongst the troops cratered as anger and frustration seethed.

The churning volcano finally erupted with a letter to the editor of the Springfield News-Leader. The newspaper would not accept anonymously submitted pieces—the writer had to identify himself to the paper for a response—but he could request that his name not be published or had the option to use a pseudonym. The author of the letter called himself “Zee Peon” in a self-deprecating exaggeration of the fief begging for an audience with the king, and the contents were explosive. The community learned of a callous criminal—a mobster, no less—who was overawing the federal guards in their own back yard on the taxpayers’ dime.

No one was more enraged than Harold Konigsberg himself. For all his unconscionable exploits, having unflattering facts about him disclosed to a small-town newspaper was beyond galling. He immediately surmised that my father was the culprit and confronted him.

Dad denied writing the letter, but Kayo was would not be swayed. Administrators questioned Dad on several occasions, increasing the pressure when a second letter with a similar tone was published in the paper, though instead of Zee Peon, this one closed with “Name Withheld.”

Dad still had to face Kayo while on duty, sometimes alone. He often escorted him from his cell to the exercise grounds and he had the unenviable privilege of waking him in the mornings. Getting the obstinate “gorilla”, as he was often referenced, to sit up, put his feet on the floor, and get out of bed like everyone else had to, was a battle of wills.

One morning Kayo kept rolling back over in bed to face the wall and refused to cooperate. My father, 36 years old and half the size of his repulsive, bloated ogre of a subject, repeated his order and told Kayo that he was not leaving until the fat bastard was on his feet. Kayo slowly turned, snarling and indignant, and got out of bed and stood. Dad then commanded him to sit on the floor, a laborious task. He waited a few moments before demanding that Kayo hoist himself up to leave the cell for breakfast.

Dad called him a crook, a thug, and a “shyster”. He never spoke of Konigsberg with profanity or anything more severe than “jackass”. But now, when I recall this story and create the picture in my mind, I can’t help finding the humor in making that son-of-a-bitch get on the floor only to struggle to raise himself again. Good on ya, Dad.

The situation grew more and more acrimonious. Kayo continued to taunt Dad and accuse him of writing the letters that the braggadocious killer deemed more disparaging than his federal rap sheet.

He repeatedly growled threats whenever he saw Dad.

“I’m gonna get you one day, Zee Peon,” he avowed as they walked from his cell.

“What did you say?” Dad asked, prodding him to repeat the threat within earshot of other officers.

Dad continued his calm stride. Konigsberg slowed his pace and lowered his voice. His tone became more sinister, and what he uttered next made bile rise in Dad’s throat.

“By the way, how’s your baby daughter?”

He had seen my birth announcement in the paper.

Categories: Stories from "The Joint"